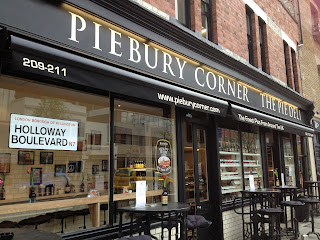 Football and good food are not usually associated with one another.  However, for all those lucky enough (?) to be an Arsenal fan, trips to the Emirates stadium are now much more exciting, food-wise, by the arrival of the brilliantly named Piebury Corner.  A welcome addition to the Holloway Road, this local business sells Arsenal themed pies and mash, to eat in or takeaway.  Named after legends of Arsenal football, one of the most popular, I am told, is the Thierry Henry, a French-inspired concoction of Venison and Red Wine.  He's on the menu alongside a lamb based Ian Wright, a chicken Dennis Bergkamp and a steak-ed Tony Adams to name but a few.  But despite the gimmicky names, the pies are seriously good and deserved of their match day popularity.  They're full of flavour and jam packed full of meat and at £6.50 for the full works of pie, mash and gravy, you'd be hard pushed to find anything in the stadium for the same value that is as tasty and delicious.  You can also buy the pies cold (£3.50) to take away and heat at home.  I did exactly this last week and froze mine before defrosting the night before and they tasted just as good.  I'm looking forward to trying them all in the coming months!  With its clever and inventive decor (the tables outside are actually parts of the old turnstiles from Highbury) this is a great example of a new local business that is also blending with tradition.  In the Holloway Road championship it's Piebury Corner 3 - 0 Greggs.

Bramble Jelly
London, United Kingdom
Why do you need this blog in your life? It's simple. London, let's face it, is not the cheapest city to live in. And with a million and one places to eat and drink, sometimes deciding where to go for that meal / drink / date / occasion can be rather daunting. And who has time to trawl through a durge of online comments to discover that a place is only 92% recommended? Well that's where this trusty little blog comes in. I, one slightly food-obsessed, city-dwelling Londoner, do solemnly promise to publish only the best, the very best and nothing but the best. All in the name of good, happy, easy, eating. (And drinking. A bit). Now pass me the wine and let's get on with it. Enjoy x